KRSNA is a mythological story told by himself for children in a very simple language. 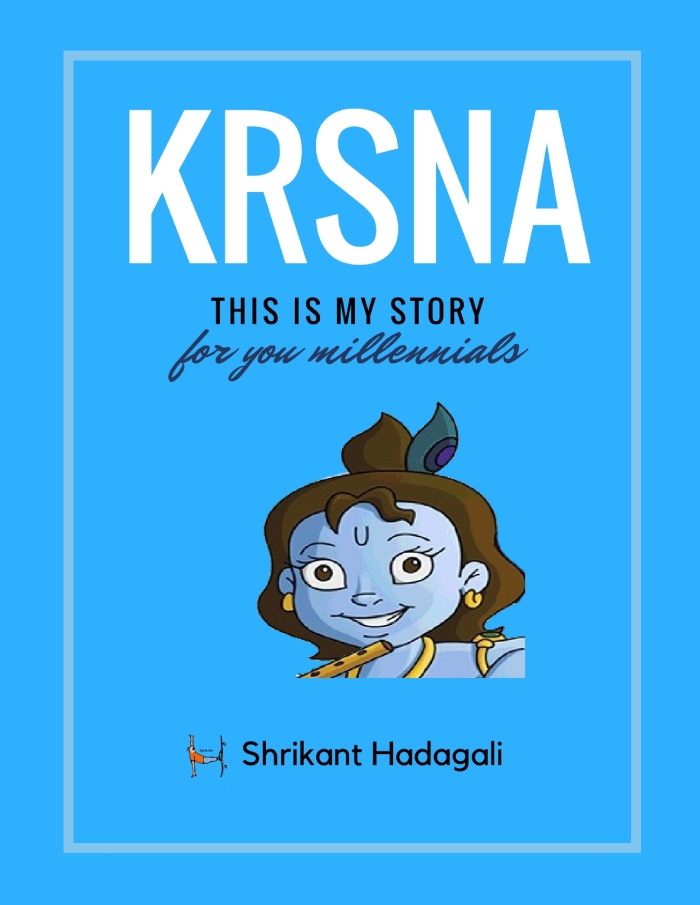 Well it’s been five thousand years and I am meeting with Lord to land on earth. We feel like we left it for you humans to handle it on your own without we meddling too much, but we are noticing the state this earth has been brought to.

The constant argument here is who will lead the effort to go down there and take care of the business. Every time; all of these thirty three million us, none wants to come down there. Everybody has gotten very comfortable up here, we look down and see the technological progress you guys have made, frankly lots of devas fear of being outdated. I remember few decades back, if I am not mistaken Narad went to Varanasi; the university of Hindu literature. He even met with you people and explained that he was Narad, Lord Brahma himself had sent him down there to address your concerns. He was heckled so bad, that we couldn’t help but laugh at his plight.

Narad went to one beggar who had his legs crippled and twisted from knee down, beard, hair and body starving for nutrition, clothes falling apart rotting on their own and said, “I see you in distress, is there anything you need from Lord?”

The man looks at him like Narad was some kind of an alien and goes, “Who are you?”

“Oh! I am Narad, the messenger of Lord himself”, explicitly displaying his signature Veena and Jasmine flowers tied around his head and arms.

“No! I am not here to beg!”, Narad looked up into the sky, frankly we were laughing out loud, this embarrassed him and continued to the beggar, “I am sent by god to check with your concerns”, frankly he was losing his cool.

“Alright then, give me hundred rupees”, said the beggar, “you make my day today”.

“No I can’t pay money, I don’t have, I can carry your concerns…”

“Alright beat it now, you are obstructing my busy hours here, go check concerns of other people out there and take them to your lord”, he threw an air quotes around Lord.

Narad, stepped away from the man and got moving, beggar yelled back, “Hey watch out godman, a bus will run you over, nobody has time for your Lord concerns out here, take it somewhere else”.

Narad turned to look around and a cyclist knocked his Veena and broke it, he just yelled back “Sorry” and kept riding his bike. Some other person picked up his broken Veena and handed it to him, “Are you looking for the drama theatre?, you look lost, it’s right there, you see that cobbler sitting down there, turnaround you can’t miss it”.

Narad frustrated, “No, I am not…”, before he could complete the man had taken off, was hanging on to a moving bus. The wooden slippers were also knocked off, he decided to meet the cobbler to repair. Limping on one leg with broken Veena he approached the cobbler.

“My good friend, can you fix these sandals for me?”

Cobbler busy sewing a leather sandal adjusted his broken glasses and looked at Narad, “What are these, you don’t wear these on streets”, he continued with his work, irritated.

“No! This is all I have worn all the time, please fix them for me”, pleaded Narad, his feet was burning in the hot sun, his other wooden sandal had stuck in the melting tar and had no clue how to get it off. Cobbler wanting to take a break, dropped his sewing and grabbed the water jug and gulped the water. Wiping his mouth turned to Narad and said, “I can’t fix these sir, leave them here, walk into the theater and when you return maybe I will see if I can fix them”.

“I am not going to a theater!!! I just need these fixed, I need  to go home”, said Narad visibly irritated by people asking him to go to theater, feet were killing and sweat dripping off his temples.

“I can’t fix them, here you can buy these”, cobbler handed him a pair of Hawaii slip ons.

“What are these?”, asked Narad looking at the soft sandal shaped pair.

“Go ahead try it, they are very comfortable”.

Hesitantly Narad slipped on the Hawaii and was amazed, they were soft, did not have to pinch his toes to hold to them like he did with wooden sandals.

“What are these”, asked Narad, a smile had broken on his face, they were so comfortable.

“Just pay two hundred rupees, I feel bad for you”,said the cobbler while he got busy with his sewing.

“I like these, but I don’t have rupees!!!”, said Narad, “Here take this, but I need these sandals”, he jumped with joy handing him a gold chain.

“I don’t want your chain, you seem to be a nice guy, go home now it’s hot, pay me later, don’t cheat me, I know you come to this theater”, cobbler waged his finger sizing up Narad.

Narad turned around the bend to check on this theater, he saw bunch of people dressed as Amitabh Bachchan and Elvis Presley impersonation, of course he could not make anything of it. This was it for him, drifted back into the clouds and reported to Lord Brahma, “Fire me if you want to, I am never going back there”, flashing his new sandals.

“I am not firing you! Go take rest”, Lord could no longer control his laughter. Narad walked away with a swag enjoying his new sandals.

The meeting went on for hours at end and there were no takers who would go down there and do the job they are supposed to do. Lord Shiva had declared, “I have gotten too comfortable with Kailash, it’s hot down there, I am not going”. Of the top three two had already ruled out. I being the third, well if you don’t know I am an incarnation of Lord Vishnu; the third supreme god. I had to speak up, “We can send Ganesha, he is very popular among them, I see every car dashboard adorned with elephant head wobbling there”.

So Ganesha was summoned, he came with a laddu in his mouth, looked and his father respectfully, then sized me up and bowed his head to Lord Brahma.

“Ganesha, we want you to go down to Earth, looks like they need your help, also they believe in you”, Lord Brahma was like a car salesman selling his idea.

“What! Did you see what they did to Narad?, he looks so normal yet he was ridiculed, I have this elephant head, thanks to this man here, if I go down there some billionaire or a politician will claim my ownership and keep me in a cell and start billing the customers for my viewing”, he went and fell to the feet of Brahma and Shiva walked away staring at me, for suggesting this idea.

The meeting continued, actually it was only me and Brahma that were discussing, Shiva was peaceful. Lord Brahma ran his fingers through his gray beard and looked at me pleading.

“Alright, alright, I will go”, I said throwing my flute on the floor. Shiva just smiled in the corner, he stood up to leave, it was settled. I had to work on logistics with Brahma, first thing I said was, I am going to lose this attire, thanks to my mom, who made my look a legend but this peacock feather and dhoti had to go.

Brahma got curious and asked, “What do you plan to wear?, I know you like those gold jewels”.

He is right, I have this affinity towards this bling, I just love it, “I don’t know yet, I just don’t want to be fooled like Narad.” I really can’t believe you guys treated him like that, what a change millennials can bring. After he saying he wants to help a beggar, he was ridiculed, what will a common man do us when we get down there, I wonder.

Anyway Lord Brahma has left it to me to wear or do whatever I want to, all he wants is somebody to get down there and bring some order. So good or bad news, I am coming, I do need some input from you guys, especially the millennials, it’s your time to shine. I am planning on getting hooked with Twitter, Facebook and Instagram, really what do I do with instagram, I am the most progressive out here but, I am clueless about instagram, I know people post pictures there, but what good would do that to me. I am also done with these chariots, planning to get a fast ride; Lamborghini or Tesla, I am torn. Tesla will be good in a sense, I don’t have to drive and relax at the back.

I am thinking we will see how it goes…